#TeamRICOCHET is an inter-functional group that includes security, game and server engineers as well as researchers, data scientists, and many others. They work in collaboration with game teams. Since RICOCHET Anti-Cheat launched last year, we’ve seen both significant drops in cheaters invading our games as well as some unfortunate increases – an expected ebb and flow that is a frustrating reality in-game security.

This week, we want to focus on a few big questions and comments we’ve seen from the community to detail more about what we do, how we do it, and what comes next.

Q – Why do I still encounter cheaters?

Anti-Cheat software works just like anti-virus software. Let’s assume that, today, we know all the nefarious ways cheaters try to impact the game to ruin your experience. This knowledge is used by our team to prevent bad behavior and punish those responsible. Our team was able to create systems that quickly recognize and respond to bad behavior, but we know that tomorrow will bring new threats.

As we take steps to ensure our systems can identify and react to the known bad behaviour; we fully expect cheat makers to continue devising new bad behaviours – some we can anticipate and some that we need to develop new systems against.

What we’re getting better at is the speed at which we can recognize when players are doing things they shouldn’t be doing. When a bad actor is detected, we hit them with something from our mitigation toolbox (or all of them at once if we’re feeling spicy) and analyse the data from the machine determined to be cheating. This is one way we can learn about new bad behavior and protect our games.

Day-to-day, that’s what we do. We continuously strengthen our systems as we’re capturing new data, dissecting it, and implementing additional changes. Simply put, we’re always working to combat cheating. 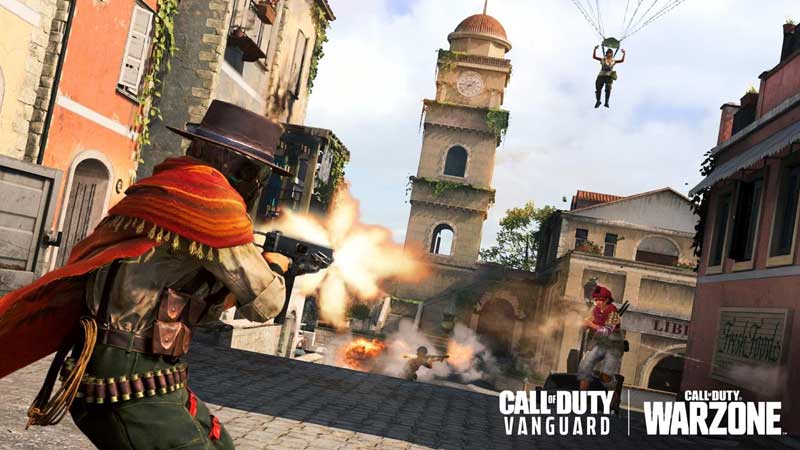 Q – What is up with these mitigations? What is the point of doing this?

Mitigations were birthed from the wizards on our Server-Side Security teams, which is part of the group that’s responsible for #TeamRICOCHET. It started with a comment like, “Wouldn’t it be funny if…” and then the team worked tirelessly to develop our new mitigation systems.

We believe mitigation is an essential step in anti-cheat security.

The question for #TeamRICOCHET quickly became: “How do we keep detected cheaters in the game to fully analyse their tactics and strengthen our security while at the same time make their experience less impactful to legitimate players?”

The solution? Let’s do more to get in the way of cheaters. Cheaters feel superior to cheaters because they use software to win games that they don’t have any business winning. Hit them with mitigations and you’ll feel a great deal of irritation. We’ve seen the clips.

Let’s take a deeper dive into some of these mitigations: 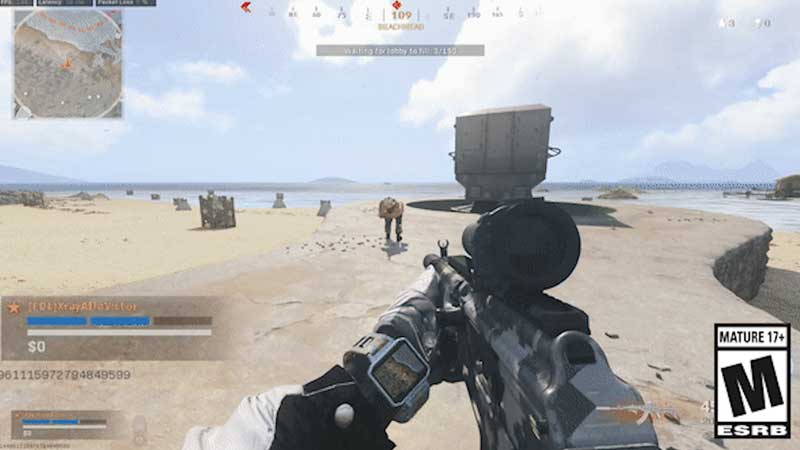 Since its announcement, this has been a fan favorite in the community. It registers for both players. If you’re being shot and see your health slowly trickle down, you know it’s likely a cheater on the other end of the battle. The cheater, in turn, wastes ammo and eventually realizes they’ve been detected. Most of the clips you’ve shared are of Damage Shield since it’s something both players can identify.

Problem: In-game weapons are being used by cheaters to quickly and easily kill legitimate players

Response: You can enhance player protections but still cause some damage by proc the visual cues. This allows affected players to identify where those shots are coming and take care of their own business. 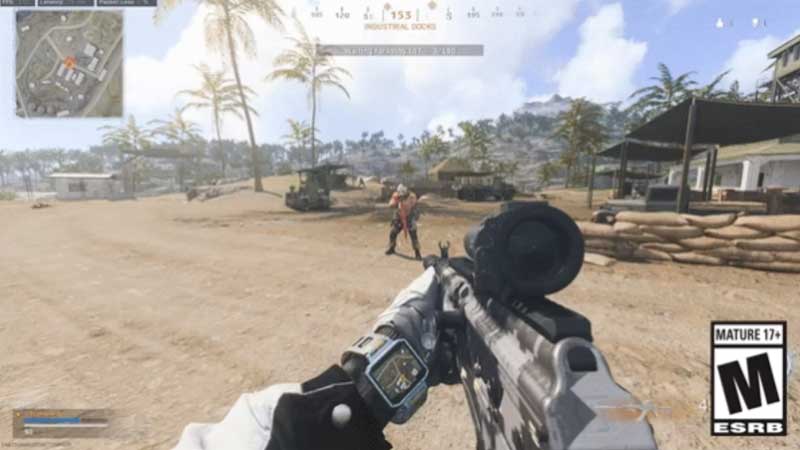 It’s your own personal Ghost Mode. We see fewer clips of this because it’s harder for legitimate players to know it’s happening. Cloaking can cause cheaters’ shots to cause all in-game players to disappear (including their bullets) if they are hit by Cloaking. So, if you’re ever hit in-game and turn to see someone spinning in circles confused, they might have been slapped with Cloaking. This makes it easy to clean up!

Problem: Cheaters can see the entire world through geometry and provide them with unfair information to win battles

Response: Protect players by hiding them from a cheater’s POV, making it impossible for cheaters to track them regardless of proximity 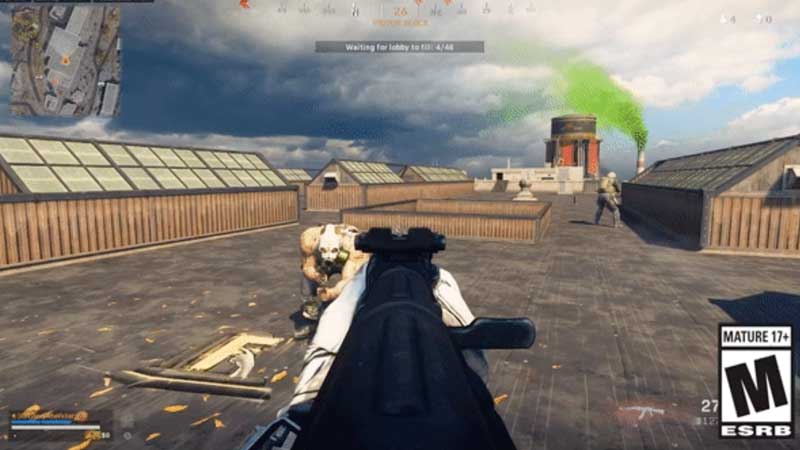 Today we’re sharing another mitigation technique from our toolbox: Disarm. We simply take their weapons (including their fists) away when cheaters are caught.

We don’t expect many clips of this to find their way online, but we have seen it in action and the reactions from cheaters are always priceless.

Problem: Cheaters can take on any level of lethality

Response: Cheats must be stopped at all costs 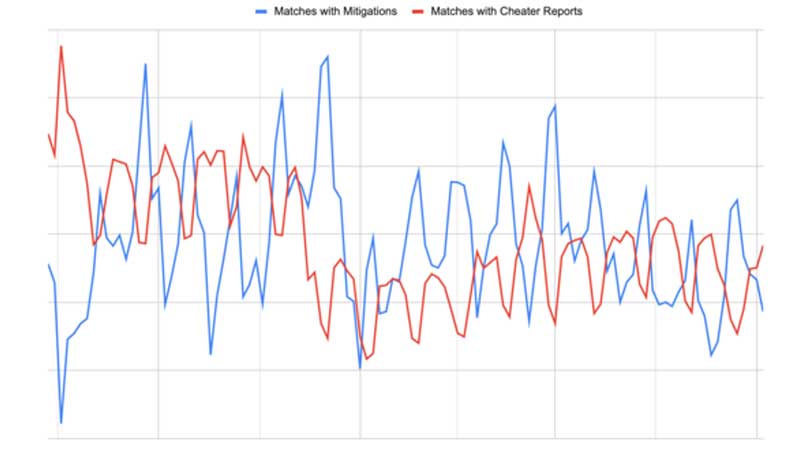 Since launching our mitigations earlier this year, we’ve kept a close eye on player reporting.

The aim for mitigations is to keep cheaters in-game to analyse their data while reducing their ability to impact a legitimate player’s experience. The data above shows that as mitigations are active, we see a reduction in cheater reports – either because players are swept up in ban waves or their bad behaviour isn’t getting in the way of your legitimate fun (because we’re interrupting their nefarious ways).

This is subject to the same ebb-and-flow mentioned earlier. As cheaters change their tactics, we see a slight increase. However, according to data over time, our mitigation system and other anticheat initiatives can quickly get us back on track so that you can concentrate on your experience.

We have other mitigations that we’ll likely spill the beans on in the future. Some are already in use, while others are still being developed. Apart from our mission to stop unfair play, we also have a secret mission to frustrate as many cheaters possible. 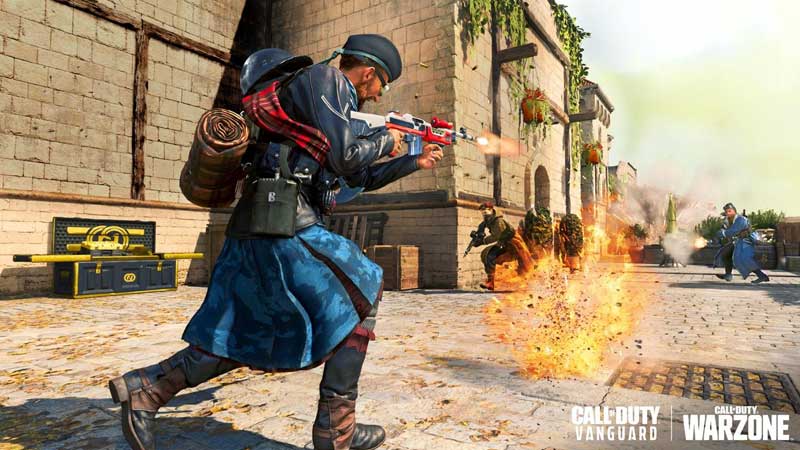 Q – Where do you go from mitigations? What about bans

While mitigations may be the most prominent element of RICOCHET Anti-Cheat but they are also in support of bans, which are the greatest deterrent against cheating.

#TeamRICOCHET issues bans every day for many reasons, often in large waves.

We have now issued 180,000+ bans in Warzone and Vanguard since our last update.

Q – What can I do to help make the experience better?

Protect your account first. We continue to eliminate the illicit account marketplace, so cheaters are always looking for new IDs in order to get back into the game. Two-factor authentication will ensure that your account stays where it belongs: in your control.

Not less important but equally important are the in-game report tools. We’ve beat this drum a lot but that’s because it’s critical for our continued success. Your in-game reports can help you identify cheating behaviours and trends.

It’s important and it helps make the system better. Keep doing it! 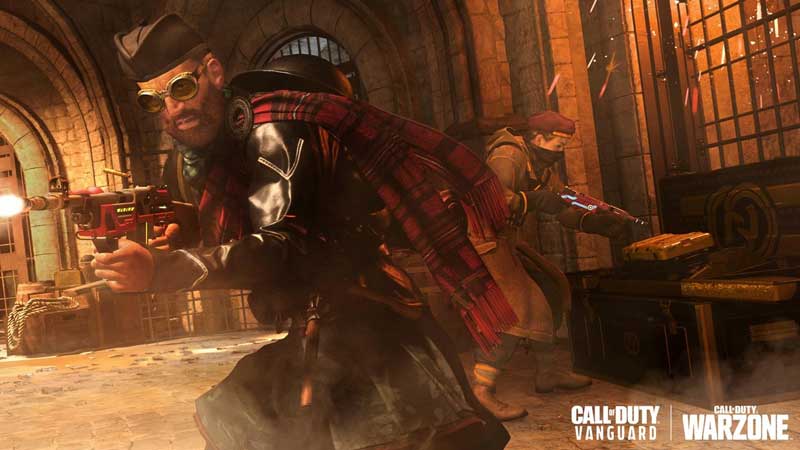 Q – What can we expect from #TeamRICOCHET when Call of Duty: Modern Warfare II and the all-new Warzone 2.0 launch?

RICOCHET Anti-Cheat – including its PC kernel-level driver – will be active on Day One for both Calls of Duty: Modern Warfare II and the all-new Warzone 2.0.

This is possible due to the #TeamRICOCHET foundation, which has been developed and iterated upon since its first launch. It also reflects the close collaboration with game teams.

RICOCHET Anti-Cheat is getting smarter as the time goes by.