The Dungarvon Whooper marked “hooper” is a horror story immortalized in a song by Michael Whelan around a late-nineteenth-century killing along the Dungarvon River in central New Brunswick, Canada. Ryan, a young Irish cook, is the central character of the story. Ryan, a young Irish cook, moves to a hideout near the Dungarvon River. Ryan brought his entire belongings along with a money belt. Whilst lumberjacks are away, Ryan is isolated from the camp’s boss, who plans to kill and steal the young cook.

The leader informs the group that the cook died suddenly after falling ill. People then burrow the body in the woods near the camp. A truly horrible “whooping” sound, however, prevents the group from falling asleep that day, possibly the ghost of Ryan protesting the murder of that he was the victim. Terrorized, the men evacuated the camp that night.

Ryan’s cutting saw can be found at Blackville Town Park, New Brunswick, Canada. This story is well-known and beloved by New Brunswick lumberjacks. Let’s know more about The Legends Of Dungarvon Whooper.

What Happened That Day?

Ryan was always the first to get up in the morning to prepare breakfast and then enter the food pans with bread and salt pork. And he’d let out a huge ear-splitting whoop to wake everyone up. After Ryan had finished eating, the men would go off to work. Ryan was unhappy because the camp boss stayed with the young chef that morning. Although the boss was not familiar, he was treated with respect and his instructions were followed.

Ryan was found unconscious on the ground by the men when they returned from work late at night. Ryan was dead and his money belt was gone. When asked about what had happened, the boss said that the young chef had suddenly fallen ill and died. However, the lumberjacks were cautious about asking him questions. The money belt had disappeared where?

The storm cloud that swept through camp made it difficult to leave. So the men had to hide the cook in a unmarked grave in the woods. The men stopped for a second on their way back from camp when they heard the most horrifying howls and yells ever heard. They heard it all night, and continued the next day, driving the men crazy with fear. They left camp and never came back.

Bernard Colepaugh of Renous wrote a story called “Dungarvon Whooper.” The Legacy Participants, a team, devoted to conducting plays that reflect New Brunswick’s rich heritage, staged their 1st output. Mr. Colepaugh is Michael Whalen’s blood relative. The play begins in a 1920s schoolhouse, with instructor Michael Whalen (Bernard Colepaugh) summoning his pupils to class and afterward enticing them with the prospect of learning outside under “God’s Beautiful Blue Sky.”

After a little intelligent feedback from Billy Phader (Thomas Saulnier), the class’s older boy, the 4 students persuade their tutor to take a moment away from British History and share a ghost story. Susan (Katie McCabe), tells Mr. Whalen that he should inform him about the Dungarvan Whooper. Michael Whalen begins his adventure in Ireland. The action then shifts back to Peter Ryan (performed in Irish by student actor Tom Daley), just before he leaves for the New Country to find a job. His mother, his family, and close friends die in the Great Famine.

Just before kissing his mom goodbye, he is handed his dad’s money belt and some Prayer Rugs. Another scene takes us to the camp where Peter Ryan is the cook. Jack Hogan, who was also played by Bernard Colepaugh, enters the camp with the rest of his team and they begin to eat. Just as they’re about to sit down, Mr. Henry Kelly knocks. They are both welcomed into the dining room and begin to eat together. 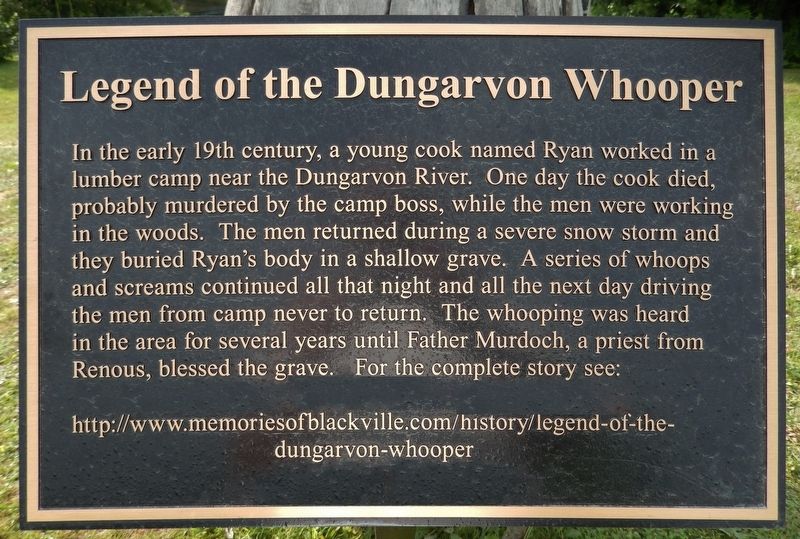 For years, the haunting sounds of Dungarvon Whoop persisted until Father Murdock was contacted by the Renes spiritual leader to help the soul sleep. Father Murdock read several biblical commands from the Bible, and made the symbol for the cross from over the forest cemetery. Some claim Father Murdock was successful in calming the ghost, while others claim Ryan’s terrifying cries can still be heard today. The sound of the train that traveled by the Dungarvon echoed through the hilly terrain, representing the whoops of the dead; hence the train’s name, THE DUNGARVON WHOOPER. Mirimichi citizens still occasionally hear the Dungarvon Whooper’s haunting cries when they go outside at sunset.